Bob Hamman is one of the greatest bridge players of all time. His resume includes 12 world titles for the United States, along with 50 North American Bridge Championships.

Born August 6, 1938, Hamman had a self-described middle-class upbringing in Pasadena, California. His parents, a salesman and a telephone operator, allowed him to play money poker as well as chess in high school. 1 Although Hamman was particularly interested in chess, bridge became his obsession during college. At UCLA, Hamman played rubber bridge incessantly. He ultimately dropped out of school and became a regular at the L.A. Bridge Club to earn his living expenses.

In 1964, Hamman played with Don Krauss in the World Team Olympiad. Bridge guru Charles Goren penned a writeup of the pair in Sports Illustrated, a noteworthy achievement in itself. Although the American team (including notable players like Sam Stayman) eventually lost to Italy, the event was Hamman's first taste of world competition.

1964 also saw Hamman playing with Lew Mathe, a preeminent American expert. The two won the Blue Ribbon Pairs in 1966, but the partnership was turbulent and ended poorly. In 1967, wealthy businessman Ira Corn invited Hamman to join a new bridge team named the Dallas Aces. Corn had the vision of an American squad that would dominate the global bridge scene, and he had the finances to support his dream.

The Aces won the Bermuda Bowl world title in Stockholm in 1970, and again in Taipei in 1971. The Aces attempted to defend their title in 1972, with Paul Soloway replacing Billy Eisenberg as Hamman's partner. The world championship event that year was the World Team Olympiads, meant to emulate the 4-year recurrence of the Olympics. But the Italian Blue Team (Squadra Azzurra) beat the Aces in the final, and also won the ensuing Bermuda Bowl championships in 1973, 1974 and 1975.

Losing annually to the Italians stung the Aces, especially in 1975. In that final, the Italian pair Gianfranco Facchini and Sergio Zucchelli were accused of cheating by the American contingent. Bitter feelings naturally ensued between the American and Italian factions. Hamman called it "my worst bridge experience... the third Italian pair was clearly cheating and the whole team should have been thrown out of the event." 2

Hamman did not represent the U.S. in the 1976 Bermuda Bowl. However, he finally captured the title for the third time in 1977. That year, the Aces won the 1977 Bermuda Bowl against the defending U.S. champions. The other Aces included John Swanson, Bobby Goldman, Bobby Wolff, Billy Eisenberg and Eddie Kantar.

In 1982, Ira Corn passed away of a heart attack. Hamman continued to play professionally with Bobby Wolff, and the pair represented America in the 1983 Bermuda Bowl. Hamman and Wolff, alongside teammates Peter Weischel and Alan Sontag, battled against Italy in a dramatic final. Hamman later described it as "the best of all wins... it was the first time we had beaten the Italians. The way it unfolded, it was a 176-board match and it was a dogfight throughout. Finally, it came down to the last four hands, and when the music stopped, we were ahead." 3

Since then, Hamman has continued to play bridge at the highest level. He has won additional Bermuda Bowl titles (1985, 1987, 1995, 2000, 2003, 2009) and a slew of national titles. Many team victories were earned while playing for sponsor Nick Nickell, an excellent player in his own right. Hamman's capture of the 2009 Bermuda Bowl was with Team Nickell, while playing with fellow expert Zia Mahmood.

Hamman's Law is one of Hamman's popular contributions to bridge. The adage says, "If you have a bidding decision to make, bid 3NT if it's a plausible choice."

Away from bridge, Hamman created his own prize promotion company, SCA Promotions, in 1986. The company is now one of the world's largest companies for prize insurance. 4 Hamman has also written an auto-biography with Brent Manley entitled "At the Table My Life and Times". His wife, Petra Hamman, is a bridge player who won the Women's Team Olympiad in 2000.

"Sometimes Ralph [Clark] and I would start on the double-dummy problems [in college] at 7 in the night and work on them until 8 the next morning." 6 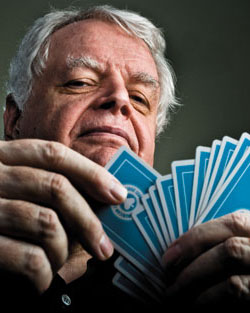