Charles Henry Goren, aka "Mr. Bridge", was born March 4, 1901 in Philadelphia. The son of poor Russian Jewish immigrants, Goren enjoyed sports as a boy but dreamt of a sportswriting career after realizing his athletic limitations. He did not play bridge until arriving at college. While studying law at McGill University in Montreal, Goren was taught by a co-ed how to play. As Goren recounted his first lesson:
"'Just follow suit,' she said. 'If you can't, you discard or you trump.' So I followed suit and, when I couldn't, I discarded or I trumped. At the end of the afternoon I was down about 4,000 points and that lovely, intelligent, desirable girl was laughing at me.

"You might suppose that I now look back in anger at my first bridge teacher. Well, no, I don't. In the first place, she had made me so ashamed that I went home that summer and practically memorized a book on bridge, thus inadvertently taking the first step toward a life of all play and no work."1

Goren eventually attained his law degree from McGill in 1922, but his life's passion was bridge. Though he returned to Philadelphia to practice law, he gravitated toward bridge tournaments and began associating with a fellow bridge player, Milton Work. In 1935, he quit practicing law to focus entirely on bridge. Goren published "Winning Bridge Made Easy" in 1936, which advocated a new point count system that was based on Work's point count evaluation system. The 4-3-2-1 system assigned points to aces, kings, queens and jacks, and quickly gained traction in the United States. It displaced Ely Culbertson's "honor tricks" system as the preferred method for hand evaluation, and helped establish Goren's reputation as an authority on bridge.

"Contract Bridge Complete", written in 1942, helped cement his reputation. The tome was a huge commercial success, and now considered a classic of bridge literature. His "Standard American" approach to bidding - still in use today - became ubiquitous across the country.

During this period, Goren also won several prestigious National events such as the Chicago Trophy (now Reisinger Trophy) in 1937, 1938 and 1939, and 1942. Playing frequently with his favorite partner, Helen Sobel Smith, he consistently finished at or near the top of major touarnments. In 1943 he won both the Chicago and Spingold Knockout team events. In 1944 and 1945 he proceeded to win the Vanderbilt Knockout Teams. All the while, he also wrote newspaper columns that enjoyed widespread popularity, and helped popularize bridge as one of America's favorite leisure activities.

Goren began the '50s with a bang by winning the inaugural Bermuda Bowl world championship in 1950. In addition to multiple national victories during this decade, he was featured on the cover of Time magazine's September 29, 1958 issue. That same year, he appeared on the quiz show "You Bet Your Life." Goren even had a television show of his own, Championship Bridge with Charles Goren, which ran from 1959 to 1964. He was a bona fide celebrity, a card player who played with the likes of Dwight Eisenhower and Omar Sharif.

The American Contract Bridge League (ACBL) elected Goren to its Bridge Hall of Fame in 1963. During this year, it is estimated that he sold over 8 million books, and had a newspaper column readership of 34 million. He also contributed weekly to Sports Illustrated, in a sense fulfilling his childhood dream of becoming a sportswriter.

Sadly, Goren played in his last national championship in 1966. A stroke shortly therafter forced him to retire from competitive bridge. 2 In 1969, the ACBL gave him the honorary title, "Mr. Bridge." In the 1970s, Goren continued writing and publishing to a limited extent, but made few public appearances due to his deteriorating health.

Goren died of a heart attack on April 3, 1991, in Encino, California. He was 90 years old. Though he never married or had a family, his legacy in the game of bridge is amazing: 1 world championship (150 Bermuda Bowl), 34 national championships, and dozens of books that have sold an estimated 10 million copies (ACBL). Contract Bridge Complete, after 12 revisions, is the most popular-selling bridge book of all time.

"Play your partner's game, especially if you know more about bridge than he does." 3

"You should play the game for fun. The instant you find yourself playing the game for any other reason, you should rack it up and go on to something else — court tennis, maybe, or old maid. Anything but bridge." 4

"It was George [Kaufman] who pointed out that you could always hold good cards merely by sitting South. 'No matter who writes the books or articles,' he said, 'South holds the most terrific cards that I ever saw. There is a lucky fellow if I ever saw one.' Ever since then, I have always sat South. That is the secret of my success, and I pass it along to you for whatever it is worth." 5 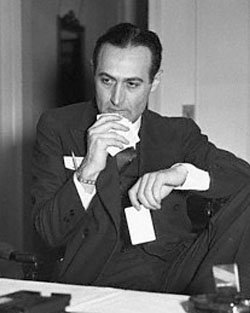 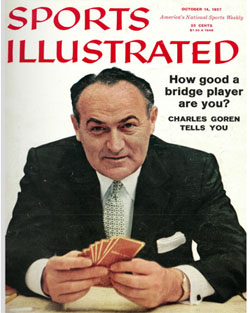 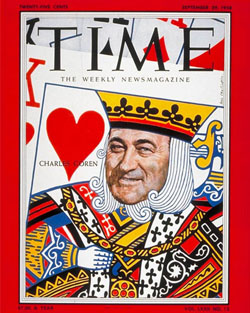 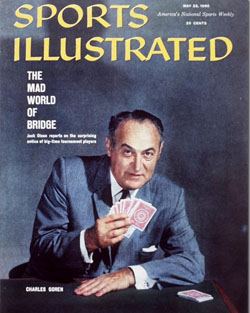