007 plays bridge against the evil multi-millionaire Sir Hugo Drax in Ian Fleming's "Moonraker." In the story, M asks Bond to investigate Sir Hugo's substantial winnings at M's favorite bridge club. There, Bond discerns that Drax is a cheat. When dealing the cards, Drax peeks at the card reflections in his polished cigarette case.

When playing with M, Bond fixes the deck against Drax in the final deal of the session:

! This is passed around to Drax, who doubles. Bond naturally redoubles.

The Duke led a low club against He was then enticed to bet £20,000 that he would win at least one trick... and lost. 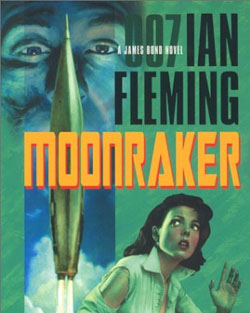