Omar Sharif enjoyed a phenomenal career as an actor and bridge player. Sharif was born in Egypt in 1932, and played cricket and football as a teenager. He did not learn bridge until his acting career began at age 21. According to Sharif, he was idle on a movie set when he noticed a bridge book lying around. After reading it, he became fascinated by the game and began playing both rubber and duplicate bridge in Cairo.1

His first blockbuster movie, "Lawrence of Arabia", was released in 1962. However, Sharif was reportedly unhappy during filming because he had to spend 18 months in the desert without any bridge. 2 Afterward, Sharif resumed playing bridge in earnest. In 1964, he captained the United Arab Republic team at the World Bridge Olympiad. His acting career gained momentum in tandem. Sharif starred in the lead role of "Doctor Zhivago" in 1965. The film ultimately cemented his status as an internationally renowned actor.

At that stage in his career, Sharif enjoyed both the wealth and prestige to actually promote the card game which he declared his personal passion. Having developed into an expert player, he formed the "Omar Sharif Bridge Circus" in 1967 to showcase bridge. The Circus was a traveling tour of bridge players that promoted the game via exhibition matches. Team members included Leon Yallouze, an Egyptian bridge pro, and Claude Delmouly, a French expert, as well as Benito Garozzo, Pietro Forquet and Giorgio Belladonna of the Italian Blue Team.

Wheeling through Europe, the Circus attracted thousands of spectators who watched the matches via BRIDGE-O-RAMA, a new technology (and predecessor to the modern-day VuGraph) that displayed bidding and cardplay on television monitors. With Sharif playing the Blue Team Club bidding system with his expert teammates, the Circus won multiple matches against local experts in multiple cities. After their European tour, the Circus barnstormed through Canada and the United States in 1968. They were accompanied by the Dallas Aces, the top American pro team of the era, and played friendly matches with local teams in several North American cities. During that year, Sharif also found time to serve as Egypt's captain in the World Team Olympiad.

In 1970, Sharif led his Circus to London's famous Piccadilly Hotel for an 80-rubber match against British experts Jeremy Flint and Jonathan Cansino. The stakes were £1 per point - huge stakes even by today's standards. The purpose of the event, according to British expert and writer Tony Forrester, was "to present bridge as a rich, exciting spectacle; to break through into television and so bring the game within the reach of millions who were still denied its joys." 3 The Circus ultimately won the match by 5,470 points, but Sharif still incurred a net loss after paying all related expenses. 4

It was also during the 1970s that Sharif began writing a bridge column with the Chicago Tribune. Co-authored with Tannah Hirsch, the column has since been widely syndicated. Sharif also penned two bridge books in the '80s and '90s: "Omar Sharif's Life in Bridge" (1983), and "Play More Bridge With Omar Sharif" (1994). During this time, he continued playing bridge in London and Paris with top experts like Paul Chemla of France.

By 2000, regrettably, Sharif quit bridge entirely. Having once proudly declared the game his passion, he now considered it an addiction: "I didn't want to be a slave to any passion anymore. I gave up card playing altogether, even bridge and gambling." 5 Sharif, however, continued to license his name to bridge software games, and even co-authored a book with bridge writer David Bird, "Omar Sharif Talks Bridge". Written in 2004, it includes some of his most famous deals and bridge stories.

Sharif passed away July 10, 2015. In retrospect, he will be remembered as one of the most famous and charismatic celebrities who ever played, promoted, and wrote about bridge.

"Acting may be my business, but bridge is my passion." 6

"There was a point when I became too keen. It was obsessive. I would play all the tournaments. I would not make certain films if they interfered with my bridge schedule. I dreamt about cards. I was driven by the competition. I was good at it and I wanted to be perfect. But bridge is like golf; you can never achieve perfection. You get better, but because it is a game of partnership there is no way you can get there. You need to perfect a system between you and your partner." 7 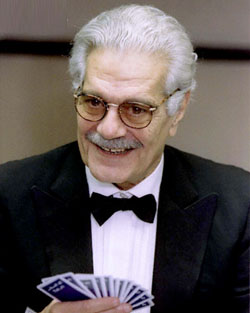 "Bridge is like golf; you can never achieve perfection."