Giorgio Belladonna (June 7, 1923 - May 12, 1995) won the most world championships of any member of the famous Italian Blue Team (Squadra Azzura) that dominated bridge in the 50's, 60's and 70's. A larger-than-life character known for his expressive nature and aggressive playing style, Belladonna collected 16 world championships in all: 13 Bermuda Bowls and 3 World Olympiads. In 1968, American expert Charles Goren praised Belladonna as the world's greatest player of the era.1

As a teenager, Belladonna's primary interest was soccer. However, prospects of playing seriously were disrupted by World War II. 2 Belladonna subsequently studied architecture and law only to drop out of school. He did not learn to play bridge until the age of 21. 3

In 1967, Belladonna joined the Omar Sharif Bridge Circus to play exhibition matches in Europe and the United States. The team, sponsored by actor Omar Sharif, included Benito Garozzo (who played with Belladonna), and experts Claude Delmouly (France) and Leon Yallouze (Egypt). In a second tour in 1970, the Circus played a team of British experts in London's Piccadilly Hotel for a pound a point. (Sharif's team would ultimately prevail over 80 rubbers.)

One of Belladonna's most well-known hands, however, comes from the 1975 Bermuda Bowl finals against the United States. The hand occurred after the two teams had already tangled over an acrimonious foot-tapping scandal involving one of the Italian pairs.

Trailing the match with a few boards to play, the Italians accidentally ended up in Eddie Kantar led a low heart, which Belladonna ruffed. Next came a club finesse, followed by the ace. The lucky trump break enabled the contract to make, and with it came a 13th Bermuda Bowl victory for the Blue Team. At the time, Kantar bemoaned his luck in Sports Illustrated. But a double-dummy analysis suggested that Kantar should have played the at trick 2 to falsecard Belladonna into a losing line of play. (Phillip Alder provided an analysis of this hand in the New York Times.)

The Blue Team officially retired after 1975. During this period, however, Belladonna continued to play bridge. He owned a bridge club in Rome (after leaving his government job in 1970), and also penned bridge columns for Italian magazines. Though he continued playing in tournaments, he would not represent Italy at the world championship level again.

"The Americans would be world champions today." 5

when asked what would have happened if Eddie Kantar falsecarded with the on Board 92 of the 1975 Bermuda Bowl. 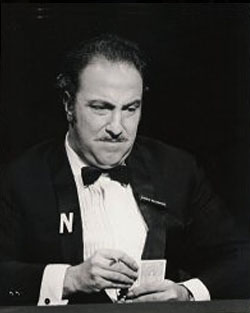 "The Americans would be world champions today."

when asked what would have happened if Eddie Kantar falsecarded with the on Board 92 of the 1975 Bermuda Bowl.