The Bennett Murder was a headline 1929 killing of John G. Bennett by his wife Myrtle Adkins Bennett in Kansas City, Missouri. It occurred during a game of bridge hosted by the Bennetts with their friends Charles and Mayme Hofman.

On the evening of Sunday, September 29, 1929, the Bennetts were losing to the Hoffmans late in the evening. The breaking point occurred when John declared and failed by two tricks. Myrtle chastised her husband for being a "bum bridge player." This caused John to slap her several times and announce his intention to leave town. Myrtle began to cry, saying "Nobody but a bum would hit a woman." 1

While John packed, Myrtle grabbed his .32 Colt automatic from a bedroom dresser and fired four shots, killing him. The subsequent investigation led to a charge of first-degree murder.

The trial made national headlines. Bridge was a sensation at the time, and the beautiful young housewife was an incredible scandal. Myrtle and her prominent attorney James A. Reed both wept dramatically while addressing the judge and jury. The defense argued that the shooting was an accident, that the couple struggled over the gun before it discharged.

After 8 hours of deliberation, the jury declared Myrtle Bennett innocent of murder. It has been argued that Myrtle's good looks and tearful state swayed the jury into making a serious mistake. It probably did not help public opinion that Myrtle thereafter qualified for a $30,000 life insurance payout.

In later years Myrtle continued to play bridge, without any further notable incidents. She passed away in 1992 at the age of 97.

John Bennett's contract was widely analyzed by bridge experts of the time, including Ely Culbertson. It should be noted, however, that the reconstructed deal is generally acknowledged as a fabrication.

, and Myrtle ended the auction by leaping to

Charles Hofman began by leading the At trick two, he continued with the The contract could be made if the trump queen was guessed correctly and dummy's long clubs were established. However, John supposedly misguessed the queen and lost three heart tricks to doom himself both figuratively and literally. 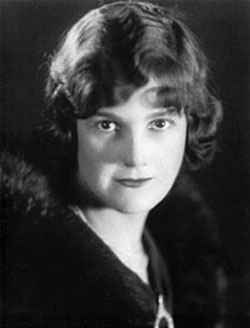 "Nobody but a bum would hit a woman."